Business of the month August 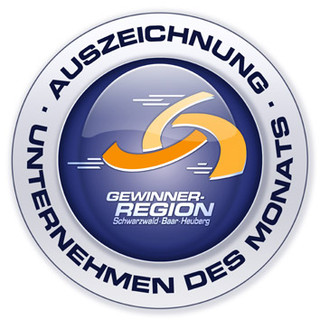 More than 50 years exists the family-owned international acting enterprise „Magnetsysteme Brugger“, situated in Hardt. Since its foundation by Rudolf Brugger in 1963 the company has been growing up continuously and today, in 2nd generation, occupies about 90 employees. Besides the 50th anniversary, the special product ideas led the independet jury to the decision to honour this enterprise.
Among his employees Thomas Brugger, managing director, received the certificate from Heinz-Rudi Link, managing director of the Institute for Economic Development Schwarzwald-Baar-Heuberg. The mayor of Hardt, Herbert Halder, and the president of the Chamber of Commerce and Industrie Schwarzwald-Baar-Heuberg, Dieter Teufel, congratulated as well.

Brugger is manufacturer of permanent-magnetic assemblies and offers out of one source: beginning from the development, the construction and the manufacturing of own tools and products, the production of individual stamped- and drawn parts, up to the mounting of magnetic systems. Those are used, between others, in the automobile industry, in the lighting- and medical technnology or in the construction industry. Moreover nameplates are coming from Brugger. At a tour through the production halls the guests got an interesting insight.

Herbert Halder emphasized that besides the special anniversary and the technical innovations of Brugger also should be named the social competences of the company (such as employment of disabled persons and familiyfriendlyness). He congratulated on behalf of the community and accentuated that Brugger was a flagship for Hardt.