Day of Health 2015 – Around the world with Brugger 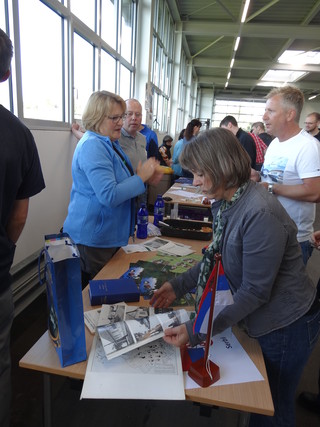 Last week, accompanied by bright sunshine, the fourth Day of Health started at Brugger. This time the slogan was: "Around the world with Brugger".

The focus this year not only was placed on the health aspect but mainly on the exchange between different nations. For this reason the delivery hall of Brugger was transferred into an exhibition hall.

First we were welcomed with Russian folksongs presented by our colleague, Larissa Russmann. Later at several booths in the hall traditional things from the homelands or favorite countries of the Brugger employees could be admired. Those were Australia, France, China, Iran, Serbia, Croatia, Poland and Russia. At the booths tipical foods could be tasted and a wide range of information about all countries could be collected. Later the Brugger employees participated actively in different kinds of sport, such were table tennis, petanque, badminton, basquet-ball, diabolo and a throwing game. Together they worked on a 3D-puzzle showing the Eiffel tower.

The aim of this annual event not only was to exercise sports but also to show the collegues to which countries they are attached. A lively exchange took place and the pleasure and engagement of the teams could even be noticed in advance during their preparations. That morning some of them even got up at 5 a.m. to cook, to bake or to do other last works.

All efforts later were evaluated by a vote. The first place achieved Russia followed by Iran and Croatia, however at the end all participants were winners of the day. The managing directors Thomas Brugger and Georg Brugger-Efinger thanked all persons involved, between them the health preventologist Bianca Wiehl, and praised the success of the event.

The morning was completed with a common breakfast offering international dishes while looking forward to the next day of health in 2016.

The scores gained at the valuation of the booths were changed into money and everybody was pleased with a donation of 1000 € to the network „Welcome in Schramberg“ which takes care for refugees.