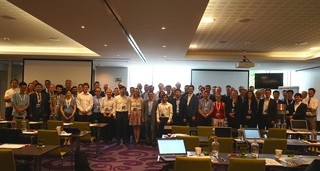 The Rare Earth Industry Association (“REIA”) is pleased to announce its formation, as a new global association for rare-earth industry stakeholders. The association was launched with the support of EIT RawMaterials, a European R&D funding agency.

The establishment of REIA comes at a crucial time of trade frictions, which threatens to impact the global rare-earths value chain. Other factors such as the unprecedented growth of new markets for new-energy technologies increasingly put the rare-earths industry in the spotlight.

“The formation of REIA is most timely,” said Dr. Nabeel Mancheri, an economist with more than 10 years of experience in the rare-earths sector, and newly appointed Secretary General of the association. “We are delighted that the 12 founding members of REIA, representing the full spectrum of industry stakeholders, have come together in this fashion.”

During REIA’s first General Assembly of its members, held in Brussels earlier this week, representatives of each of the founder members were appointed to the association’s Board of Directors. Dr. Badrinath Veluri of Grundfos was elected by the General Assembly as inaugural President of REIA; Myriam El Kara of Talaxis and Shimizu Kotaro of the Japan Society of Newer Metals were elected as Vice-Presidents. Rob Koppelmans of JL Mag Europe was elected as Treasurer. Each officer will hold their positions for the next three years.

Joining Dr. Mancheri on the management team for REIA are Gwendolyn Bailey, a rare-earths scientist as sustainability advisor, and Elbert Loois, a critical raw-materials expert and chairman of the initial project advisory board, as management advisor. An Advisory Board was also created to support the association.

“The priorities of REIA are to ensure market transparency and sustainability for the rare-earths sector,” commented Dr. Veluri, “through the development of a well-matched and balanced global stakeholder network. Our members will work collaboratively on a conjoined and coherent approach towards raw-materials policies and issues. We look forward to welcoming additional members to the association.”

About the Rare Earth Industry Association (REIA)
The REIA is a Brussels based international association that provides a unique stakeholder platform to mitigate business risks in the rare earth value chain. The association represents the interests of its united value chain participants, be it by stakeholder networking, project research or sustainable sourcing. The REIA works as a guiding partner for its members in understanding rare earths related environmental and technological trends as well as market dynamics.