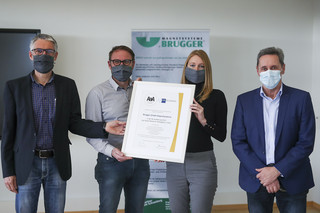 Despite the difficult conditions, Brugger Magnetsysteme of Hardt is once again setting an exclamation mark during the Corona crisis: the medium-sized company has been awarded the seal "Attractive Employer" in gold by the Chamber of Commerce and Industry (IHK) Schwarzwald-Baar-Heuberg. This makes it a member of an extremely select circle.

Brugger GmbH came up with yet more positive news shortly before the end of 2020, after the magnet specialist had already been pleased to receive the Baden-Württemberg Environmental Award. The company had improved yet again in the third audit, which is carried out uniquely by the Chamber of Commerce and Industry throughout Germany, and in which both the company and the environment are examined on the basis of numerous aspects and have now received the highest accolade in the form of the "Attractive Employer" award.

Hugo Frey, the initiator of the seal, was impressed by the performance of the medium-sized company when he presented the golden certificate. "It is one of the best companies in Germany," Frey said in a video message to employees who were prevented by the pandemic from attending the presentation of the seal. This puts the company in the select circle of only two audited companies who are currently able to advertise with the seal in gold.

In the audit, which included a staff survey, Brugger GmbH consistently achieved the best results in the examined areas of "Leadership and corporate culture", "Competence development and qualification", "Occupational health management," "Family friendliness", "Remuneration and Recognition" and "Employer branding". However, this excellent performance did not come as a complete surprise. The company had already received the silver seal in 2016. In the re-audit in 2018, the family company narrowly missed out on gold, but as the result of further improvement managed to achieve this goal at the end of 2020.

In the past two years, the company management with the two managing directors Thomas Brugger and Georg Brugger-Efinger once again managed to turn a number of adjusting screws in order to achieve further improvements. Among other things, the aim was to further promote the talents of its staff in order to enable them to move forward. A number of management workshops were held. "It was primarily about personality building and problem-solving processes," explained Brugger.
A personality test and role play were also used to maintain employees' behavioural preferences. Eva-Maria Rapp, Head of Human Resources, explains the background: "This was to allow everyone to find out what their counterpart was thinking, and possibly respond to feedback." Managing Director Thomas Brugger was able to learn the success of this first-hand. "When I first received feedback from a member of staff in logistics, I knew it had got through," he says with satisfaction. It made it clear that staff and bosses in the company indeed met on an equal footing. Brugger-Efinger emphasises: "This is simply part of mutual respect."

For the initiator, this example illustrates why Brugger Magnetsysteme has quite rightly received the golden seal. "For the feedback with each other, it is important to create the right climate. And that is something you have done with perfection," said Frey. In addition, the internal communication has been further improved; there has been a successful changeover in the area of health management, and the Corona management, which was also included, also received the 'top' rating, explained Frey.

For the company, though, this award is no reason to rest on its laurels. According to Ms. Rapp the audit has led to a reflection of what was done and achieved in previous years - but they don't want to rest on that. "We have now received a methodology from the Chamber of Commerce," says Brugger. This is to help ensure that the company remains one of the most attractive employers in Germany.

Picture: The two managing directors Thomas Brugger and Georg Brugger-Efinger (from left) with HR Manager Eva-Maria Rapp are delighted to receive the seal "Attractive Employer" in gold, which was presented by Chamber of Commerce project manager Hugo Frey.