Technical Professions, only for boys? Not at all! 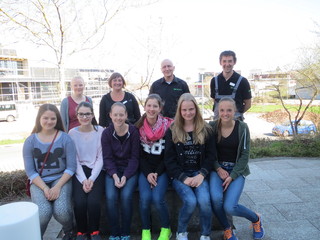 Last week six girls from classes 7 to 9 participated in the national Girl's Day at Brugger Magnetic Systems in Hardt.

Brugger GmbH wants to approach the job of a tool mechanic to girls, in order to show them that girls also are able to take a technical job, not only boys. For this reason Brugger GmbH since many years takes part in the „Girl's Day“.

Early in the morning the girls were received by Wolfgang Dold, the head of tool construction, as well as by Michael Fichter and Janet Matosoglu, who both are tool makers. After a tour through the company they had a common breakfast. Strengthened they started work in the mould making department, where they were instructed in the manufacture of a magnetic board game. The six girls were divided into two groups so that Janet Matosoglu and Michael Fichter each were responsible for one group.

First the Hermle CNC milling machine C600U was explained to one group, meanwhile the other one was working on the plastic plate, which was needed for the board game. The plastic plates were cut and the Name of each girl was engraved. After that the girls perforated their plate and put in a metallic small plate. Then they filed, deburred, measured and scribed. It could be noticed that the girls had a lot of talent and that they well had listened to the explanations before.

Then all together had lunch in Brugger's cafeteria. After that the groups changed, so every girl at the end had its own game board. The whole day Janet Matosoglu and Michael Fichter were at their disposal for device, information and answering their questions. Due to this the girls not at all were afraid to handle the machines.

Before leaving, they gave a short feedback about their day. The great excitement about the self manufactured board game could be noticed on the girl's side as well as on side of Brugger GmbH.
Brugger GmbH next year again will participate in the „Girl's day“, which is a good opportunity fo wake up the girl's interest for a technical job. Perhaps some of them even want to learn a technical profession thanks to their experiences at the Girl's day.