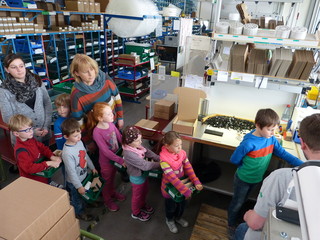 „TECHNOlino“, which is a common technical project of the kindergarten St. Elisabeth and the supporting companies Brugger GmbH Magnet Systems, the carpenter Flaig and Laufer Turned Parts in Hardt meanwhile became a fix component for all involved.

During the passed weeks 20 first graders of the kindergarten St. Elisabeth visited another time the local enterprises and manufactured a wooden train. The train became a whole by passing through the three companies. The result is a very beautiful product, which was worked out by the kids with a lot of prestidigitation, knowledge and pleasure.

The carpenter Flaig built the beginning of the process and was responsible for the wooden parts of the train, which were grinded and drilled there. Then in the Brugger GmbH, our employee Heiko Merz first guided the children through our production halls. Later the school starters could magnetise the needed magnets on their own and mount the couplings at the wagons and the train. Later the train got its wheels at company Laufer where the turned parts were made. At last the kids screwed on the wheels on the nearly terminated train.

By this common project the interest of children for science and technology shall be woken up in a playful way already at preschool age.